Meandering Around the Midan 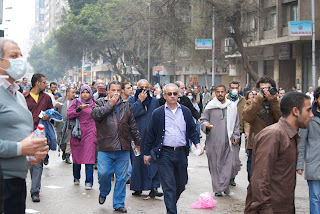 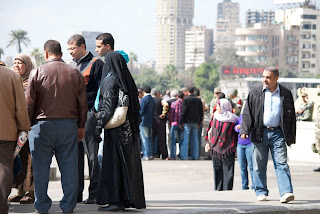 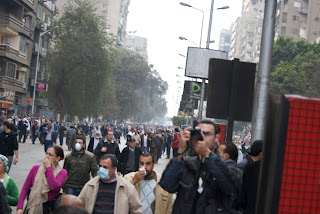 One important aspect of Midan al-Tahrir yesterday and of the demonstrations up until now which has struck people who live here and may not have been so widely reported as the brutality against foreign reporters by pro-government thugs is the remarkable organization, cooperation, and good nature of the people demonstrating for change.

First let me break for a bit of humor before going on to make the necessarily ponderous academic points. People have been cleaning up in the wake of the huge amounts of trash left behind whenever hundreds of thousands of people come together. And inevitably as garbage is bagged it mounds up. Smack in the middle of the midan there was a huge pile of garbage bags which were awaiting removal. Some anonymous wag had posted a sign on top: “site of the new building of the National Democratic party” in reference both to popular understandings of the ruling party (it’s a corrupt pile of garbage) and to its need for a new headquarters (since the old one was burned in the first days of the protests).

More impressive, as a segue into my main topic here, let me describe waiting to get in to the square. Thousands of people were milling around at the at the western edge of the Qasr al-Nil bridge where there was an extremely narrow opening in an otherwise impressive row of soldiers behind barbed wire and a tank. At the point the crowd was funneled, single-file, in the direction of several groups of people waiting to check identity cards and pat people down. I was standing with another American and we were discussing, in English, whether to go in. As we decided we would suddenly somebody behind us shouted out in Arabic “Move on up, there’s plenty of room ahead” which struck me as hilarious because it’s exactly what the conductor tells you when you board a more or less equally crowded bus. I broke out laughing as did most of the crowd around us.

I’ve read accounts by other foreigners of their fear and mistreatment in the midst of the protest demonstrations, especially on the first day so I’m not going to say that the protests have just been one big happy outing for everybody. One account that I read is indeed frightening and sobering and I’m sure it’s an accurate description of what he experienced in the area around Talaat Harb square.

My own particular experiences have been different but I also have to admit that I’ve been more careful (doubly so since I have a transplanted kidney and have absolutely no desire either to take a blow to the abdomen or to spend a night or more locked up and away from my medications) than I would have been 40 years ago. It’s also very clear that the government is playing on xenophobia but this has some popular resonance. So I’m sure that the people who called in to the government television channel last night to say that they had heard people giving orders in English or distributing leaflets in foreign languages about how the demonstrations should go fully believed what they were saying.

Yet the atmosphere inside Midan al-Tahrir on what the demonstrators called the “Friday of departure” was exhilarating. The experience of having to move to the back of a crowded bus is a common one in Cairo. Its unpleasant, hot and stuffy being in the middle of people packed in like the proverbial sardines. It’s also not uncommon in such situations for women to be harassed, for pickpockets to ply their trade, and for people to be annoyed and annoying.

One thing that has been different in Midan al-Tahrir for most of the week (and again I can’t speak to reports of quite different behavior) has been the remarkable calmness, openness, and tolerance by large crowds of Egyptians. Completely covered women carrying children marched alongside chic young women dressed in shirts and sleeves and men with the traditional peasant robes and business suits and everything in between. Not only was Egyptian pluralism on display but nobody—from Azhari shaykhs to young hipsters—voiced any criticism of anybody’s else dress or looks or presence. It’s been widely remarked among Egyptian women I know at any rate that they haven’t been bothered, subjected to harassment, or even had anybody try to work his (or her) fingers into a handbag.

One reason this is important, of course, is that it shows how remarkably the events of the last week and a half have united as well as divided Egyptians. The other reason, though, as many Egyptians (but relatively few foreigners as far as I can tell) have noted is that it shows that Egyptian spontaneous activity in the absence of a cruelly repressive state is not chaos but order. Again, I don’t wish to romanticize the Egyptians: people here are not cut from some different cloth as other human beings and people here can be as petty and as mean-spirited as people anywhere else. But what the events of the last 10 days show is that Egyptians, like Londoners during the Blitz, can rise to the occasion. In another post I’m writing about a more intellectual discussion among Egyptians about these issues but for now I want to focus on behavior in Midan al-Tahrir and the streets.

There was certainly violence in many parts of Egypt in the past 10 days and while much of it was inspired by the government, it would be wrong to think that all of it was. Where the political movement was centered, however, there were relatively high levels spontaneous cooperation and tolerance. Many people here think has been reinforced by the so-called popular committees that have played so important a role in safeguarding neighborhoods (such as my own) from violence and looting. What one Egyptian friend after another has remarked is that people who previously didn’t talk to each other (for example, the butcher and the attorney or the plumber and the professor) have suddenly found themselves spending the night together with a common task and engaging in long (but not necessarily always political) conversations.

One Egyptian colleague has referred to it as indicative of much higher levels of “social capital” than any realized Egypt had. Given the absence of bowling alleys, choral societies, and cooperative local political endeavors (which had been completely foreclosed by the centralized state), this spontaneous cooperation or social capital seems to arise from mysterious sources and will, no doubt, be the subject of many an American doctoral dissertation in years to come.

I’m not going to weigh in on that subject except to say that, once again, it ‘s clear to me that the role of emotion and human solidarity has so completely eluded American social science (of both the rational choice and the postmodern persuasion) as to convince me it needs to be rebuilt from the ground up.

What I do want to conclude with is this thought which I’ll also try to flesh out later today and tomorrow here and for a post at the Social Science Research Council. Whatever we think we know about taking power out of the hands of the autocratic hierarchical state (you can call this democracy or local self-government or popular participation) is that people who live near each other need to be able to deliberate (talk to each other) and make decisions together with both the authority and the responsibility for their own lives. That they could not do this is something the highest officials of the Egyptian state have long maintained. What the pluralism of the demonstrations has shown is that it need not necessarily be true., Indeed for the last 10 days it has not been true that spontaneous activity here apart from the state is disastrous disorder. In this more profound sense than anything else Egyptians feel they have changed the world they live in.

NB: The photos are not themselves from Midan al-Tahrir or from February 4. They are either from the demonstration of the "Day of Rage" near Kubri al-Gala' or in the area of the Corniche the first day the army had its tanks out. What they do give is a sense of the diversity of Egyptians engaged in the demonstrations.

> I’m not going to weigh in on
> that subject except to say
> that, once again, it ‘s clear
> to me that the role of emotion
> and human solidarity has so
> completely eluded American
> social science (of both the
> rational choice and the
> postmodern persuasion) as to
> convince me it needs to be
> rebuilt from the ground up.

Be sure to post the link to the piece you write for the SSRC!